After a recent tour of Global Oceanic Designs, Inc.‘s X-Wave Facility, we were introduced to one of their consultancy projects. The SeaDog Wave Pump. Of course, being who we are, curiousity got the best of us, so, using our quizzical natures, we decided to start asking questions about it. We were so intrigued by what they were telling us, we decided “what the heck, let’s write another review”.

So, here we are, reviewing another new technology for the world. The SeaDog Wave Pump. The brain child of Kenneth W. Welch, Jr. of SeaDog Systems, Inc. The SeaDog Wave Pump is currently being housed and tested at Global Oceanic Designs, Inc.‘s X-Wave Facility in Willis, Tx. Ok, so, you know where it is.. you probably don’t care right now.. what you care about is the same thing we cared about.. “What IS IT?!”

We’ll start by saying that we’re sure a lot of us have been to the beach, but have you ever thought about what could actually be done using the power of nature and those beautiful waves that you watch when you’re down at the shore? Well, SeaDog Systems, Inc. Has, and from those thoughts, an idea was born… “We should create some kind of device to be able to harness that power”, which is exactly what they did. 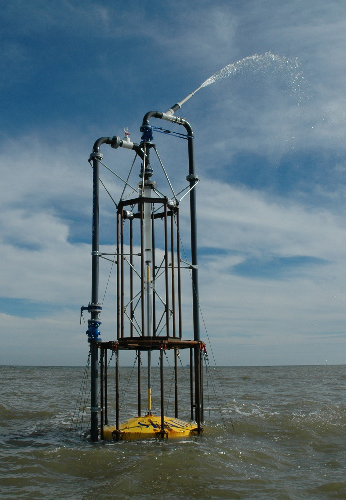 The SeaDog Wave Pump is an ingenious wave driven water pump powered by the natural ebb and flow (up and down motion) of ocean waves. That ebb and flow provides the SeaDog Wave Pump a permenant fuel source (a fuel which is cost-free, emission-free, renewable and permanent). By harvesting from the incredible quantity of potential energy available in nature’s waves SeaDog Wave Pump pumps enormous volumes of water at desired pressure. (What a concept, a pump that pumps, right?) This pressurized water can then be put to work in hundreds of useful applications. For example, the water can be desalinated or used for electrical power generation, or both. The only limitation is defined by what you attach.

Let’s face it, our world is facing a momentous challenge, the days of fossil fuels such as oil and coal are numbered, that means, there’s an ever increasing demand for more “green”, clean, renewable energy and freshwater. The SeaDog Wave Pump helps to do just that.

We’ve learned the SeaDog Pump has had approximately 18 years of development, trial testing done at Texas A&M’s wave tank and multiple official sea trials (one of which was overseen by Dr. Warnakulasuriya of Texas A&M University). That sounds pretty impressive to us. Another thing that we thought was interesting is that through these trials, they found out that the pumps have no negative effect on the waves or on the environment around them. In reality, the environment seemed to thrive around the pump, schools of fish swimming through the base structure, coral and barnacles starting to grow on the base, sea gulls sitting on the tops of the pumps “resting after a long flight”, as if they were meant to be there. We’ve heard that any notable evironmental impact predictions of large scale SeaDog Wave Pump installations came back with positive reports such as the creation of artificial reef structures that provide breeding grounds for varieties of local wildlife species. We were shown the fact that due to this impact, the media went wild. TV Stations, News Media, Magazines all had extremely positive things to say after the testings.

As a matter of fact, during the second sea trial, which was 90 days in the Gulf of Mexico, 2500 feet off the coast of the historic Galveston Pier, that the SeaDog Wave Pump was the “talk of the town” and the testing crew enjoyed the attention from the community while residing at the Hotel Galvez. The restaurant and bar patrons would nearly always respond in kind to show support and have some fun with Mr. Welch and the crew.

So, how does this thing actually work? Basically, the concept is that there is a bouy which reacts to the ebb and flow of the waves. Essentially, it’s a giant Bouy based piston.. aka, as the bouy moves, so does the piston, so the waves in effect move the piston. Of course, we all know science never lets things be as simple as “the waves go up, the bouy goes up, the waves go down, the bouy goes down”. Obviously, there are a lot of other factors that go into the design and implementation, but we’re not scientists, so it is a bit over our heads. But if you’re that kind of person, feel free to ask Mr. Welch.

We found out that the “bouy” we talked about is actually called a “Bouyancy Block”.

Mr. Welch told us that there are actually 2 different types of pumps that are available for market. One has a smaller bouyancy block and has a lower pressure output (usually used for running through hydroelectric turbines). The other (Nicknamed Fat Boy) has a much larger bouyancy block and delivers much higher output; designed more specifically for deslination purposes.

Pumps can be used individually or in “farms” (multiple pumps connected together). Additionally, the 2 different types of pumps can also be used together, or, independent of each other.

What’s this mean? Let’s look at the options individually.

First, we have Hydroelectric Turbines. What are they and what do they do?

To generate electricity, water must be in motion. This is known as kinetic or moving energy. When the flowing water turns the blades of a turbine, the form is changed to mechanical or machine energy. The turbine turns the generator’s rotor which then converts this mechanical energy into another energy form — electricity. Since water is the initial source of energy, this is called hydroelectric power.

As we said, the world is frantically searching for means of renewable and sustainable solutions. Wind and Solar, while a somewhat viable solution, can not begin to meet this increased demand. Most renewable energy technologies are unreliable due to the intermittent nature of their respective fuel sources. Wind turbines and solar are often paired with natural gas or deisel powered generators that are fired up to provide power when the wind stops or the sun doesn’t shine.

Waves, on the other hand, are far more consistent, predictable and reliable.

Together, the SeaDog Wave Pump and hydroelectric turbine technologies are capable of producing energy with no adverse effect on the environment.

Next we have Desalination, why is it important?

There are numerous reasons why Desalination is important such as:

Overall, the main adversity to desalination is that the remaining brine can destroy the environment, and it is not cost effective for desalination plants to try and return this brine to the ocean to be “recycled”. However, if you use the 2 different types of SeaDog Pumps in unison with each other, one can be used with the desalination process, and the other can be used not only to help generate energy, but to also to return the brine back into the environment safely and in a cost effective manner.

This brings us back to the SeaDog Wave Pump and how it applies to these scenarios.

As a whole, the SeaDog Systems Wave Pump uses the natural properties of bouyancy and displacement to pump gas or liquid at nearly any pressure.

This pressurized gas or liquid is extremely useful in numerous applications. Aside from the 2 we’ve already mentioned, it can also be used for air circulation, energy storage, waterjet cutting and even propulsion, to name but a few.

Obviously because, “The SeaDog Wave Pump Pumps!”… In both of the scenarios we talk about, as well as many more, water needs to be pumped through an outside device. So that leaves 2 choices: 1, use a fossil fuel pump and waste more resources just so that you can push a bit of water through something, or 2, use the SeaDog Pump and let the ocean do the pumping for you without using any resources at all.

As we said earlier, we’re no scientists, but to us, the solution is obvious. Let’s do something to GAIN resources rather than waste them.

Awesome, It Works! Next question.. what are they going to do with it? 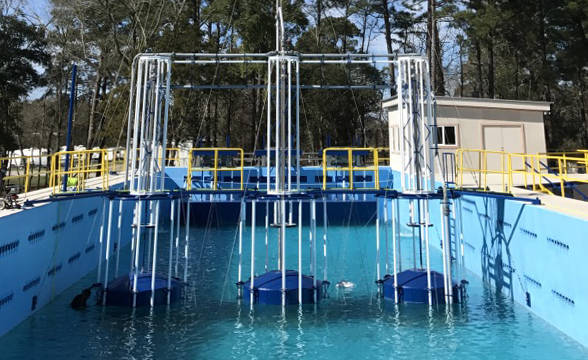 And, of course, we asked that exact question. To which they responded “Two Options. One, find a manufacturing company to mass produce it, or two, get a private company or investor to just buy it outright.”

According to the team, they only have to finish the Final Testing in order to get an official rated capacity, also known as “Nameplating”. (Basically it’s a metal plate placed on the pump that says what the maximum capabilities are.)

After that happens, they will be making the Pumps commercially available by using a technology created by their consultant, Global Oceanic Designs, Inc. This technology, a graphical interface unlike anything else on the net, located at GTBD.US will be used for their marketing purposes.

It seems to us that the SeaDog Wave Pump has changed the game and unlocked a new renewable future for humanity.

We’re looking forward to that future and wish the SeaDog Systems, Inc. team the best of luck! We can’t wait to see what’s next.

Wave Testing – The Next Level